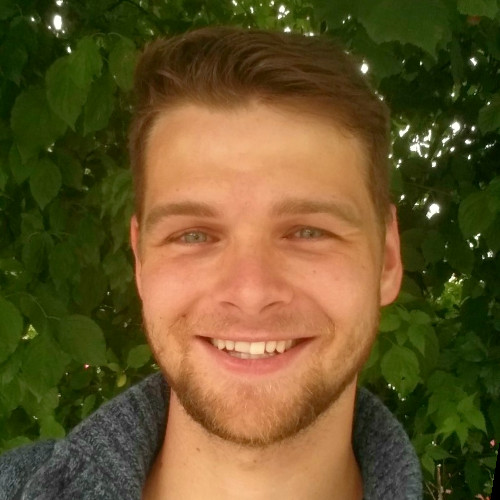 I met Tobias in late 2017 at one of the first meetups in Munich. Back then we didn’t fill a bar table, but we still had a great time talking about IOTAs vision and possible future while drinking a beer.

I’m not mistaken, if I say Tobi’s contribution has increased a lot the popularity of IOTA in Munich this past months.
I thank you very much for all your efforts and wish you the best of luck in your professional future.

Can you tell us a bit about yourself? When and how did you get involved in the DLT-sector?

Sure, I’m 27 years old, studying biochemistry and doing my Master’s in Munich. At first glance this is completely unrelated to DLT and IT, but I am very curious and try a lot of different things in my life, like scuba diving or bush-craft and survival. I always need new challenges and I’m bored by day-to-day life. I enjoy exploring, researching and developing, so I have tried many things, such as programming, 3D printing, lock-picking, photography, woodworking and so on and so forth in my life. My curiosity and my inner motivation drive me to learn new things and have brought me to DLT.

You did and are studying Biochemistry. When and how did you realize that IoT-solutions and programming where more exciting for you?

I’ve been interested in programing for quite a while now. I started developing and building my first software at the age of 22. The blockchain journey started with an internship in bioinformatics, where I analyzed MM/MD simulations of the Hepatitis C Virus Protease to characterize mutations and enhance drug development in the long term. This is how I got into IT again. A friend of mine made me curious about cryptocurrencies, so I investigated Bitcoin in August 2017 and bought some. I was interested in the technology, because I wanted to understand my investment. As a consequence, I started to learn everything about blockchain and its limitations. Driven by my scientific background and my urgent inner need to solve problems, I was searching for better alternatives. This is how I eventually got into IOTA and IoT.

The first time I heard about IOTA was in late September 2017. I was amazed by the beauty of the tangle itself and the fairness within the core protocol.

You organized the first IOTA Meetup in Munich and if I recall correctly Bavaria; Explain a bit about the first coming together and how they developed.

The funny thing is, I wasn’t even present at the very first meetup, despite organizing it. I was spending time with my family because of my father’s birthday. The second meetup was just 2 weeks later. We met in a bar and had some drinks while talking about IOTA, DLT technology in general and how it could improve the world. It became kind of a ritual. We met once a month just to talk about IOTA and lots of different people took part. I met more and more people and that’s how I connected to the organizers of the Blockchained Mobility Hackathon which just took place in Munich. We organized a prequel to the Hackathon, to get more companies and developers into IOTA. This went quite well as we had more than 120 people in the audience. While keeping the small and familiar evenings you will also see more exciting big events located in Munich in the future.

When and how did you come with the idea of an IOTA Tip Bot?

It all started in a small chat room in telegram, where I was chatting a lot with friends. There are quite a few developers in there and with one of them, Philipp, I discussed the possibilities of a TipBot. We had some really good ideas and after I explained to Philipp how to develop with IOTA, he came up with a first prototype, while I was still creating a scalable and modular Tipbot in my head. I drew the architecture I was thinking of and showed it to him. He was amazed by the modularity and used the code of his first prototype to build the first version of the ioTipbot following my drawings.

How long did it take to program it and how many members were involved in this?

The ioTipbot is still an ongoing project. IOTA is a project which is still in development and so we must update our code almost every time IOTA updates the IRI. To get where we are right now it took us more than six months and probably it will never be finished. There are always new challenges coming up and additionally new ideas pop up in our heads almost every day. To give you a fixed number: To get to the first ioTipbot version it took us two weeks. The very first prototype, was done in about 2 days. It is still done by Philipp and me, but we have a version 2.0 on our roadmap which is built by Werner.

You were and currently are a reference for the IOTA protocol in Munich and therefore has given some speeches regarding possible use-cases. How do this people react to your presentation? What are some common questions and what do they criticize the most?

My talk was about the disruptive nature of IOTA, its chances and its vision. I have demonstrated how IOTA might change the world we live in and how DLT and especially IOTA is designed to disrupt the economy as it is today. IOTA can change the way we live and earn money, this scares most of the people. After my talk, I only got some questions on the coordinator and qubic, which wasn’t released back then. The hardest criticisms I was confronted with concerned my focus on the disruptive nature which frightened people. I will keep this in mind while preparing my next talk about IOTA and will be more diplomatic in the future.

You are starting your own company based on IOTA use-cases, right? How does it feel to start a company in your 20s?

It is not about the company. I am founding the company to have a framework. It is more about building and creating real world adoption. It fills me with joy to see things running and working based on the IOTA protocol. Founding this in my 20s feels just right. It is not about my age or about me. It is about the fun IOTA makes and the inner drive to bring IOTA to the real world, to make a real difference. In my opinion the company is just a way to increase the impact our work with IOTA will have in the real world.

Where do you see your company and the general adoption rate of the IOTA protocol in (let’s say) 4-5 years?

I think IOTA will be further than today. The research in the field of tanglemath and network stability should mostly be finished by 2022. Q should be done in about 4 to 5 years and we will see first companies partially running on the IOTA infrastructure. Of course, I am confident our company will make a difference and will enable many production-ready use-cases built on IOTA. The biggest challenges we see is to scale, especially in the beginning. Finding good developers, who are willing to learn about IOTA will be the biggest challenge we face in the next 4 to 5 years. If we can overcome all our problems, have a lot of luck and stay thirsty, we can become one of the most important companies in Industry 4.0. But that’s more likely to happen in the long run.

Do you want to add something to the interview?

I just want to thank everyone – especially you – for the opportunity to be a part of this great interview series.

About the author Daniel